Wishing you an ‘Enlightening’ year 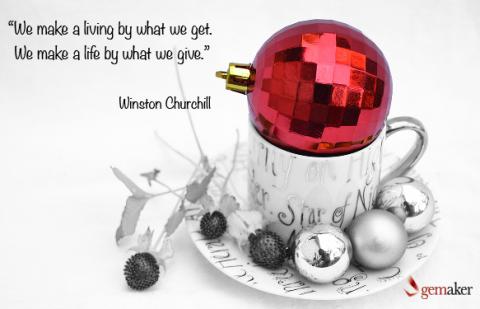 At gemaker, we’re committed to “paying it forward” – making a contribution to a colleague, acquaintance or business we admire for the joy that it brings, rather than the return that it gives to the company. For Christmas each year, instead of giving cards and gifts, we have chosen to focus on a deserving charity, campaign, individual or organisation that reflects gemaker’s ethos and professional values.

In 2013, we’ve selected the Enlightening Campaign, which is being run by the Australian Academy of Science. As many of you will know, the maths and science literacy of Australian school children is declining at an alarming rate. According to recent reports on our performance in the Program for International Student Assessment, Australian students now rank 17th in the OECD for science, down from 10th in 2009. The Australian Academy of Science describes young people as ‘a generation that has lost their connection from the wonders of science and the opportunities that abound from it,’ and says that ‘if we are to witness scientific frontiers shift in the spectacular way they have in our past, Australia must act now.’

At gemaker, everything we do is based on innovation and on the science, engineering and technology foundations from which that innovation grows. The Enlightening Campaign seeks to keep Australia at the forefront of scientific discovery by inspiring children and young people to engage with the wonders of science and its potential for a range of meaningful careers.

We are very pleased to make our Christmas donation to such a valuable initiative, one that aims to transform the way young people think about science. Not only will campaign have significant flow-on effects on Australia’s standing as a country committed to the development of knowledge, it will also directly impact the sectors in which gemaker operates, and will enhance our long-term capacity to continue taking bigger, better and brighter innovations direct to the global market.

When we spoke today, I congratulated Prime Minister @AlboMP on his election. We discussed everything from fighting climate change to creating economic growth – Anthony, I’m looking forward to working with you and moving forward with progressive ideas.

Who would have ever thought there would be year 6 of the @FranklinWomen Mentoring Program 😱 as always in awe of the people taking part, both mentees and mentors 🙏 https://twitter.com/SethDevanshi/status/1529684041674665984

#FWMEntoring2022 started with @Melina_Gee One of the biggest cohorts of #mentees #mentors this year. Happy to be a recurrent mentor this year, thanks to @CentenaryInst