Unconcious Bias (and how to fix it) 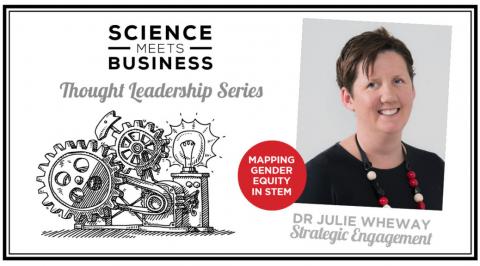 Our very own Dr Julie Wheway was a guest speaker at the first annual National Symposium: Connecting Women in STEMM conference held this week at RMIT University, Melbourne. The event, hosted by Women in STEMM Australia, aimed to connect women in STEMM regardless of their discipline or profession. In response to the conference, Julie was also asked to participate in a thought leadership series published on Science Meets Business, mapping gender equality in STEMM disciplines:

It’s hard to believe that, in 2016, there is still a chronic underrepresentation of women in science, technology, engineering and maths (STEM) at senior levels. It’s recognised that family constraints, perceived lack of promotion opportunities, lack of mentorship and culture play a huge part. But to what degree does bias – often unconscious bias – inhibit women’s progress in STEM?

Unconscious bias refers to a bias we’re unaware of, which happens automatically, and is triggered by our brain making quick assessments of people and situations. Unconscious bias is influenced by our own background, cultural environment and personal experiences.

Everyone has subconscious biases, including you. They are simply the brain’s way of coping with and categorising all the information we receive every day. Our tendency to discriminate against a group or type of person may not be intentional, but we can do something to change it.

Science suffers from a perception of masculinity

In STEM, there is often an association of science with maleness, and scientists with masculinity. A quick Google Images search for ‘scientist’ yields many more pictures of men in lab coats than women. We’ve all been to conferences with all-male panels, and entire sessions with only male speakers. These messages and experiences at the back of our brain influence our decisions, and we don’t even know it.

Studies have shown that male students are more likely than female students to underestimate the strengths of their female classmates, despite similar grades. This bias against women can follow individuals from the classroom to the workplace. In research meetings, it’s sometimes assumed women are there in an administrative capacity, rather than being highly skilled, PhD-qualified researchers. My own sister, who has a PhD in machine learning and statistics, is often asked by men at conferences, “How comfortable are you with mathematics?”

So how can we improve things? It’s heartening to hear that the Australian Research Council has announced in their new gender equality action plan, which involves appointing more women to the grant application review committee. They’re also considering measures to help panellists become more aware of unconscious bias. In the US, some universities run programs on unconscious bias as a professional development opportunity for graduate students.

If you’re reading this – male or female – you can help by taking the following steps: