Science meets Parliament: How to influence the impact when worlds collide 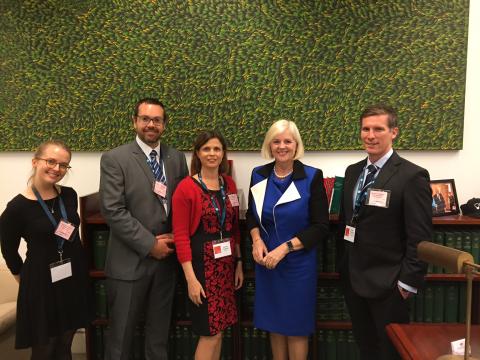 For the 18th time, Science meets Parliament (SmP) was held in Canberra this week, and this year I was honored to be one of around 200 STEM delegates. It was an enlightening two days that fostered better understanding and relationships between scientists of all walks of life and politicians.

On the first day, Chief Scientist Alan Finkel opened the conference stating that ‘With mutual respect we can power the future’, that beakers (scientists) need bankers (investors) and backers  to get ideas to fruition. Alan said scientists could easily work with politicians using 4 easy A’s: Attitude (having the right attitude to work together), Ambassadors (translators who understand both sides of the fence), Access (pathways to working together eg. science meets parliament) and Ammunition (widely consult to have collaboration on your ideas before presenting to politicians).

Equipped with anecdotes, advice and policy making on the first day, we were let loose on the second day to meet politicians face-to-face. This is what I learnt…

When worlds collide like this, generally at least one party hopes the impact will improve their trajectory. Without proper preparation meetings can be anticlimactic and the planets spin away from each other without noticeable alteration to their orbits. I believe this disappointing outcome can almost always be avoided, with proper preparation.

If you’re pitching to a busy politician, you need to grab them like gravity or they will fly past you to address a more compelling demand on their time. Irresistible attraction requires common ground, so before you meet, you need to research your audience and find something you share.

For example, before I arrived at SmP, I found out that I was lucky enough to be meeting a politician who was not only a mechanical engineer at a power station and oil industry in an earlier life-stage, but had also run her own business. I rubbed my hands with excitement, because I wanted to talk about the commercialisation of technology and how Australia could do it better, and I thought it likely, given her background, that Ms Andrews would be interested in enhancing the outcomes from another collision of worlds: when Science meets Industry. As it turned out, she was very interested.

Before we met, I discovered that her electorate in SE Queensland depends on tourism, retail, manufacturing and service industries. So, I considered which of gemaker’s clients had innovative technology with applications in those sectors, and was ready to discuss any of them, if the opportunity arose. On the personal side, I also learnt that she was a mum (with teenage daughters) working in a male-dominated sector… (same as me).

It’s not always easy to find points of connection, but if you search hard enough, you will always find a way to relate to any other person, even if your political beliefs are worlds apart. It’s also important to be aware that non-scientists may feel threatened or intimidated by your academic credentials and technical jargon, so don’t brandish them about. Be a human first, scientist second.

MPs are not ETs

The edited soundbites we’re fed by the media can suggest that politicians come from another planet, but they are not extra-terrestrials, they’re humans too, with incredibly hectic and challenging lives. SmP demonstrates this to scientists. I came away thinking how exhausting it must be to work as politicians do, spending long hours away from family, being required to maintain a deep level of understanding of multiple issues across a broad portfolio – unlike scientists, who specialise. Politicians must be ready to discuss cutting-edge issues with anyone at any time, while simultaneously facing constant public criticism and responding to incessant demands from diverse constituents.

Some scientists make the mistake of adding to this noise, making their pitches all about their own interests, problems and needs. To cut through the noise your pitch should have an objective – your ‘ask’ – but you are very unlikely to get something unless you give something in return.

When you meet a politician, bring a gift, and I don’t mean flowers, wine or chocolates although I did bring books on science myths and inventions (yes, I’m a geek and proud!) …. Bring a solution to a problem faced by the politician, or something that will improve their constituents’ lives. And wrap your gift attractively: don’t make your pitch a blunt and boring statement of facts and figures; tell a story, paint a picture and put emotion in it to make it engaging.

Show the politician how your research applies to the world beyond the laboratory, with real benefits they can relate to with feeling, not just intellect. Because this is where scientists and politicians share a deep similarity: most of them seek to make positive change in the world because they care about the future of their family, community, nation and planet.

Of course, definitions of positive change differ. There were some politicians present at SmP whose views I do not agree with or admire, including those who take an ‘anti-expert’ stance, seeking to spread distrust of scientists. But if you avoid interactions with these people, if you don’t open the conversation and keep it civil and constructive, then how can you hope to shift their thinking?

If you do it really well, you might even shake their world.

Each month, we provide valuable information on innovation, commercialisation, funding and business growth for researchers, inventors, startups and expanding businesses.