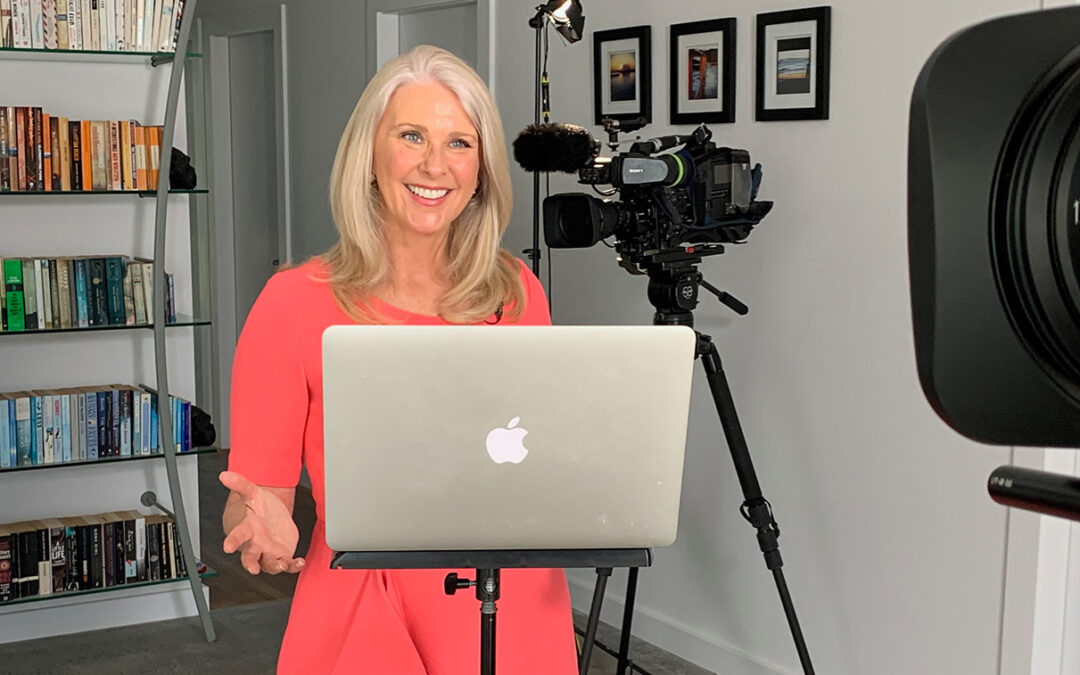 It started with heart palpitations.

Then, clammy hands and cold feet.

The last thing I remember is feeling light-headed, before collapsing on the studio floor.

During my first weekend presenting on metropolitan television, I fainted. Not once, but twice. (Foolishly, I agreed to come back to present the weather segment a second night, after this disastrous opening act.

Despite setting an extremely low bar in the early ‘90s, I sustained a 30-year career in the media by learning to manage performance nerves, panic attacks, and anxiety.

In this brave new world of video conferencing, online meetings, and even family FaceTime, everyone is expected to be a professional TV presenter, lighting director and audio expert, controlling body language, gesture and voice while talking to a tiny dot on their device.

This does not come naturally. (See: Fainting.)

Here are some top tips:

This is why we seek out a supportive ‘cybernetic feedback loop’ by looking for other eyes on the screen, to see how our message is being received. When we do that, we lose real eye contact with the audience, and reduce the impact of what we’re saying.

Draw arrows on Post-it notes and stick them around the lens as a reminder. Visualise you’re talking to a trusted friend, to maximise engagement.

Set the lens at eye level. Too low and you’re looking down on the audience; too high and you’re pleading with them to listen.

Stand while presenting to release pressure on the diaphragm, allowing the lungs to expand. Put your laptop on a pile of cookbooks, printer paper or a storage box. (During lockdowns, we’ve been using puzzle boxes.)

If you over-gesture, ignore the old advice about sitting on your hands.

Gestures can actually increase the value of the spoken message: The most successful TED Talks feature more gestures.

However, you need to give your audience regular breaks. Find ‘resting poses’ near your belly button in between gestures. You can gently hold your own hand, interlink fingers, or make a fist with one hand and nestle it inside the other.

Showing your palms communicates openness. Avoid putting your hands in pockets, or clasping them behind your back.

When we’re feeling nervous, we tend to speak too quickly, in a shaky manner, with upward inflections. This makes us sound like we’re questioning our own expertise. Practise key messages out loud, pushing down inflections at the end of sentences.

To add gravitas, use the ‘Three Ps’: Pause, pace and projection. Pausing before messages signals you’re about to say something important; pausing after creates a moment for it to sink in.

Pace should connect with content. If you’re sharing something exciting, speed up; slow down when explaining complex concepts.

Project an extra 10% to ‘crack through’ the lens, and ensure you’re being heard clearly.

Fun fact: Most of us breathe incorrectly.

If you watch babies lying on their backs, their stomachs rise and fall. Because we spend much of our lives hunched over desks – or electronic devices – we take shallow breaths.

During diaphragmatic breathing, you expand the belly while breathing in, deflating it when exhaling – almost like a balloon. Breathing deeply lowers the heart rate and reduces stress and anxiety.

Find a quiet place to do 10 deep breaths before any presentation, to calm the mind and allow cognitive flow.

No matter how powerful your message, the audience will only remember roughly one-third of what you say.

Repeat your messages in different ways. One technique is to use the ‘Rule of Threes’.

Overall, the best piece of advice is to be yourself. We’re living in a time of lockdowns, craving human interaction. Don’t worry about saying “um”, or tripping over a word, or being imperfect. The international trend is for presenters – even in the top tier corporate space – to be fallible, because it’s relatable to the audience.

In the words of the English poet Alexander Pope, “To err is human; to forgive, divine.”