Foster entrepreneurship in children rather than squashing it! 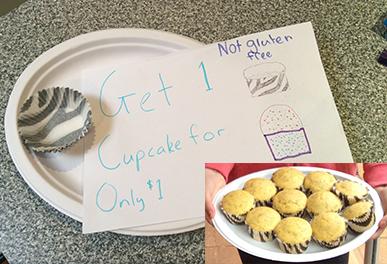 My eldest child calls herself the test child. I learnt what not to do with her and improved my parenting technique for the younger one.

She’s trailblazing new ground and each time we hit a new situation or additional responsibility… I agonise over whether I’m doing the right thing.

Then one week when she was 10 years old she went to vacation care run by my then employer ANSTO. During the week my daughter and a friend that she met made plastic beaded jewellery for the week both at care and at night. She told me the night before the last day that she had told all the kids to bring their pocket money and let their mums know that she would be selling her hand made bracelets and necklaces when the parents visited them at lunch. She had prepared a sign to promote them and a box to house them in. I was astonished at her entrepreneurial spirit and progress.

The next day my daughter and her friend set-up their make shift stall and made their way around the children and parents promoting their wares. She even had the courage to approach my CEO to see if he’d like to buy one for his wife.

At the end of the day my daughter and her friend had made $13 each. Not bad for no outlay and plenty of hard work. I was very proud of her and the effort and ingenuity she displayed. When I told a colleague of mine at work she told me that I should be encouraging her rather than discouraging her.

I looked back at all those times she’d wanted to go out and sell and I had stopped her or shut it down every time. I really felt quite ashamed of myself.

To try and rebalance and encourage others I brought the Club Kidpreneur program to her local public school. Children in years 4-6 participated in making their own products and selling them at the Eveleigh Markets eight weeks later. The children thoroughly enjoyed themselves and were confident upon leaving the program. They saw their hard work and creativity could lead to a tangible commercial result which they don’t often see at school. The skills they learn day-to-day and that inevitable job 5-10 years away don’t seem to match.

Since then my oldest has sold tomatoes from her friend’s garden out the front of their house, and has contracted herself out as a hair and make-up artist and has painted faces at parties.

When she decides what she wants to do the world is her oyster. She is creative, smart and is sales focused.

So when her 11 year old sister came to me these school holidays with her friend and asked if they could make lemonade to sell on the corner of our street, how could I say no? But a lack of available lemons put that idea to rest. I suggested they make and sell orange and popper seed cupcakes instead.

I hung around to instil the virtues of good hygiene, attractive looking produce, repeatable portion sizing and pricing. They raced off with a plate of goodies and a sign and returned with $6 each. Not bad for an hour’s work at 11.

So as my older child said she was the practice one. Hopefully after you’ve read this insight you’ll see the value of nurturing this entrepreneurial spirit. Encouraging and supporting them while they have the confidence to charge in there and have a go and also be cute enough to get away with it.