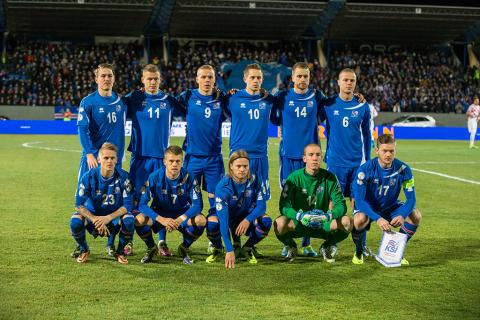 Half our television bulletins are devoted to the latest sporting results and disgraced athletes regularly make the front page of the nation’s newspapers.

But it’s not often the chief scientist gets on the sports bandwagon.

Which is why it was a surprise to see Alan Finkel telling a room full of business leaders at the Australian Financial Review Innovation Summit this month that Australia has a lot to learn from the success of Iceland’s national soccer team.

For those unaware of the buzz surrounding the Icelandic team, the small Nordic country shocked the soccer world in June when they made it through to the finals of Euro 2016.

The team defied all expectations by defeating England 2-1, humiliating the soccer powerhouse and knocking them out of the tournament.

But here’s where it gets interesting.

Iceland’s win wasn’t a happy accident. The country made a conscious decision to be good at soccer and invested in the sport.

Imagine if Australia made a decision to be good at innovation.

Dr Finkel said Iceland has climbed 109 spots in the FIFA rankings in the past three years.

“Wouldn’t we be glad to move even one or two notches up the Global Innovation Index, or the OECD’s ranking for schools,” he said.

So how did a country with 300,000 people beat one of the oldest and best soccer teams on the planet?

And what can we learn if we want Australia to compete on the world stage in research and innovation?

Dr Finkel outlined four things Iceland did to build a genuinely competitive international soccer team, and what Australia can take from their success.

One: They created the infrastructure

In the 1990s, Iceland didn’t have A-grade soccer facilities.

They had gravel pitches, dark winters and gale force winds that would deter even the most enthusiastic player from training.

So they built indoor football pitches that allowed athletes to train year around, heated by Iceland’s excellent geothermal power.

“If science turns money into knowledge—then innovation turns that knowledge back into money, and generally a lot more money than the taxpayers put in,” he said.

Two: They invested in education

“They stopped relying on well-meaning parents, and started paying for the training and accreditation of their coaches,” he said.

“For every 500 Icelanders, there is now one internationally-accredited coach.

“And every child with the talent for soccer can pursue it with world-class support—including the support to be mentors and teachers in their turn.”

Dr Finkel said it needs to be a national priority for Australia to build incentives and support for quality teaching at all levels of education, from early childhood to PhD.

“If Iceland can have one UEFA coach for every 500 people—we can certainly have at least one qualified mathematics and science teacher accessible to every child,” he said.

Three: They built the culture

In the 1990s, it was said that you could hear a pin drop at an Iceland game.

Today, soccer is nothing short of a national obsession.

Almost ten per cent of the population travelled to France for Euro 2016 and at home watching the team on television was almost compulsory, with 99.8 per cent of Iceland’s TV viewers reportedly tuning in to watch the historic win over England.

Just as soccer is fusing with daily life in Iceland, Dr Finkel said he wants to create a culture where people with a science PhD are valued by Australian businesses.

Four: They played to a strategy

Iceland didn’t have star international players but they did have a strong work ethic, a belief that they could win and a great game plan led by a much-loved dentist who served as the team’s part-time head coach.

“I have the advantage of two team coaching roles: as Executive Officer of the Commonwealth Science Council and Deputy Chair of Innovation and Science Australia,” Dr Finkel said.

“In both roles, the basic task is the same: identify those areas where Australia has a national need or a strategic opportunity to pursue through science.”

“The Council is our opportunity to bring together captains of industry and academia with the leaders of government.”

The full text of Dr Finkel’s full speech ‘A mind to win’ is available online.

* Australians are actually more interested in news about scientific discoveries than sport, according to this 2010 ANU Poll.